Interviews with the creators of RAVISH

Interviews with its creators by 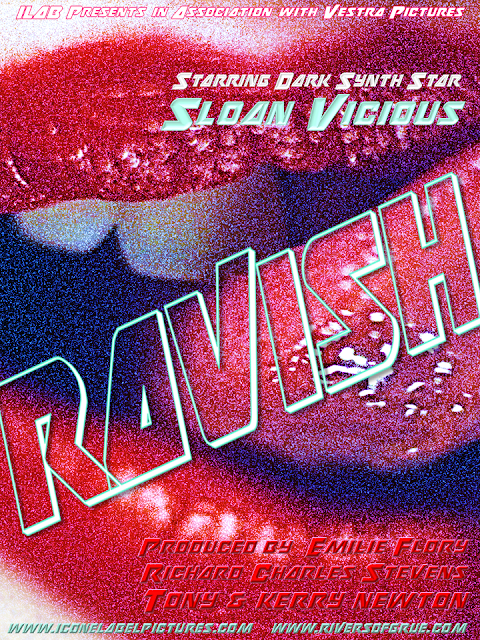 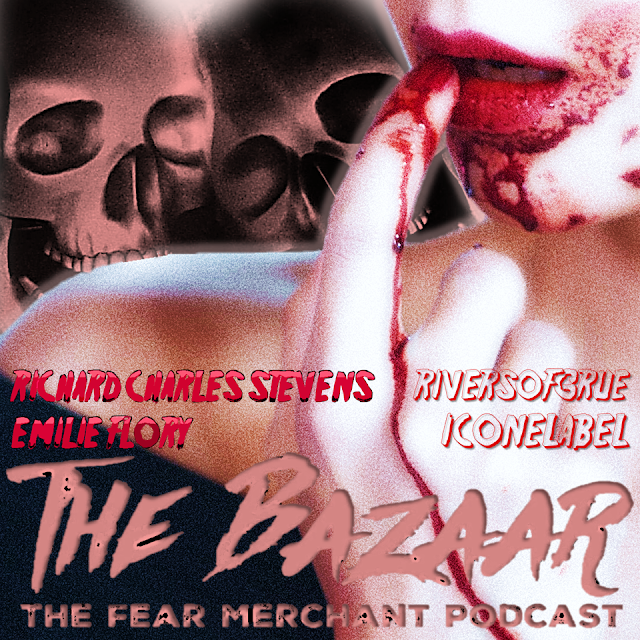 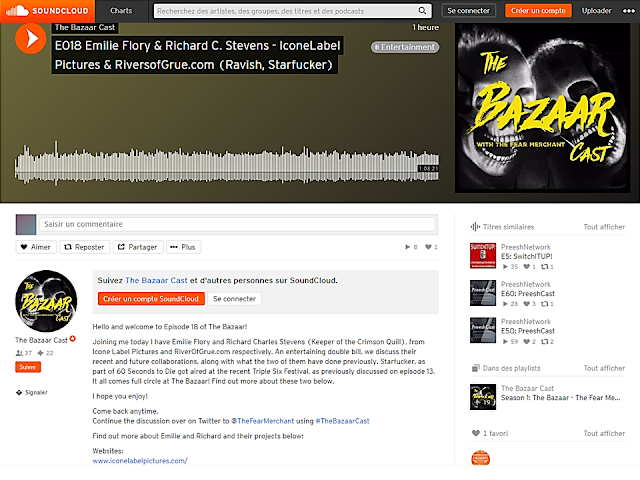 Hello and welcome to Episode 18 of The Bazaar!
Joining me today I have Emilie Flory and Richard Charles Stevens (Keeper of the Crimson Quill), from Icone Label Pictures and RiverOfGrue.com respectively. An entertaining double bill, we discuss their recent and future collaborations, along with what the two of them have done previously. Starfucker, as part of 60 Seconds to Die got aired at the recent Triple Six Festival, as previously discussed on episode 13. It all comes full circle at The Bazaar! Find out more about these two below.
I hope you enjoy!
Come back anytime.

Continue the discussion over on Twitter to @TheFearMerchant using #TheBazaarCast 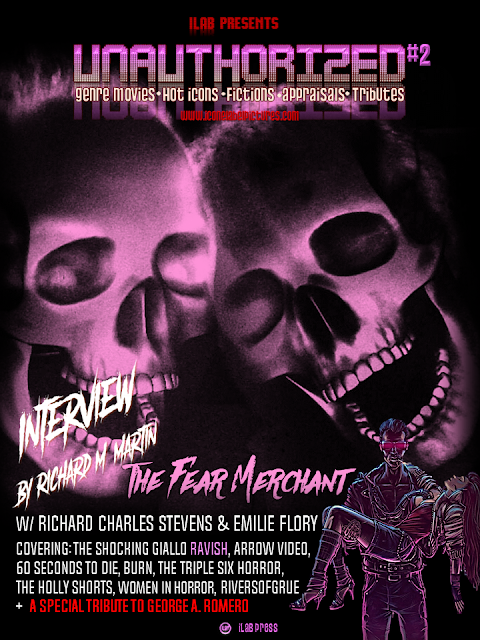 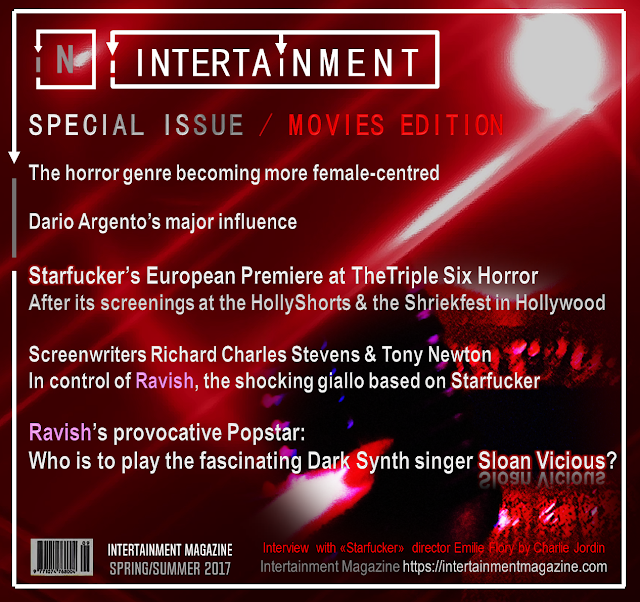 JUNE 13, 2017 BY CHARLIEJORDIN
The shortest film of Triple Six Festival, clocking in at 60 seconds, is Starfucker. I interviewed director and writer Emilie Flory about the process of making the film, the role of women in horror and the future of the genre.
Congratulations on your screening at the Triple Six Festival in Manchester. Your film, Starfucker, was the shortest film shown at the festival. What were some of the challenges you faced in producing a film of this length?
Starfucker is a part of the horror anthology, ’60 seconds to die’, produced by Tony Newton and distributed by Alchemy Werks / Sector Five Films, that will be released very soon. When Richard Charles Stevens (producer of Starfucker and associate producer on 60 seconds to die) offered me to make a one minute film for Tony’s horror anthology, I wanted to take up the challenge. Some have warned me it was impossible to tell a story in one minute; they alleged this project was very risky, but it didn’t stop me. As a screenwriter, I find this kind of exercise frustrating, but as a director I think it’s rather thrilling: I reckoned we would treat a subject in an advertising format and play on several levels of interpretation for the audience in record time. I had a strong idea with a twist and a great, highly motivated team who followed me as one man. Regarding the post-production, for example, it was a dream. It happens rarely. I am very pleased to see that a festival like Triple Six Horror is not afraid of presenting a film that short in its selection... 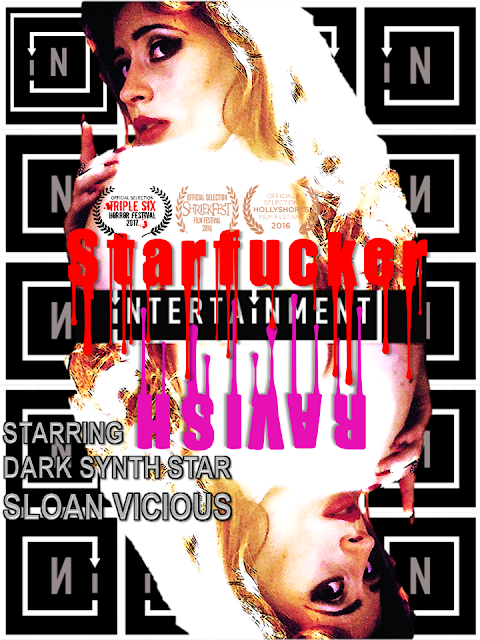 ... Marion Berdoati Sauzedde, announced at the festival that there were plans to make Starfucker into a feature film. Can you update us on these plans?
The producer Marion Berdoati Sauzedde who represented us, Richard Charles Stevens, producer of Starfucker and myself, is one of our supporters on Ravish, the feature film based on Starfucker. Ravish is in development in association with Vestra Pictures. The screenplay is in the process of being written. The idea of a feature film based on Starfucker is coming from Richard Charles Stevens. He is working on the script with Tony and Kerry Newton. I am their lucky director and I am currently working on the preparatory elements of the movie. It’s an aesthetically ambitious low budget project. Besides, we’re looking for producers and funds. We also launched our own fundraising campaign on http://www.iconelabelpictures.com/p/ravish.html?spref=tw 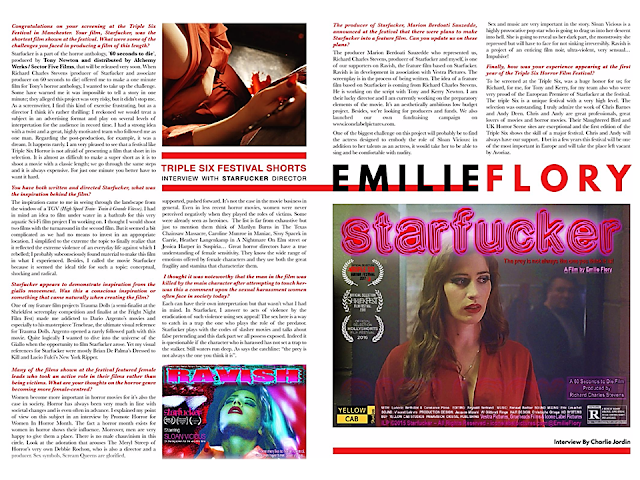 One of the biggest challenge on this project will probably be to find the actress designed to embody the role of Sloan Vicious: in addition to her talents as an actress, it would take her to be able to sing and be comfortable with nudity.  Sex and music are very important in the story. Sloan Vicious is a highly provocative pop star who is going to drag us into her descent into hell. She is going to reveal us her dark part, the monstrosity she repressed but will have to face for not sinking irreversibly. Ravish is a project of an enticing film noir, ultra-violent, very sensual… Impulsive!
READ MORE:
https://intertainmentmagazine.com/2017/06/13/triple-six-festival-shorts-interview-with-starfucker-director-emilie-flory/