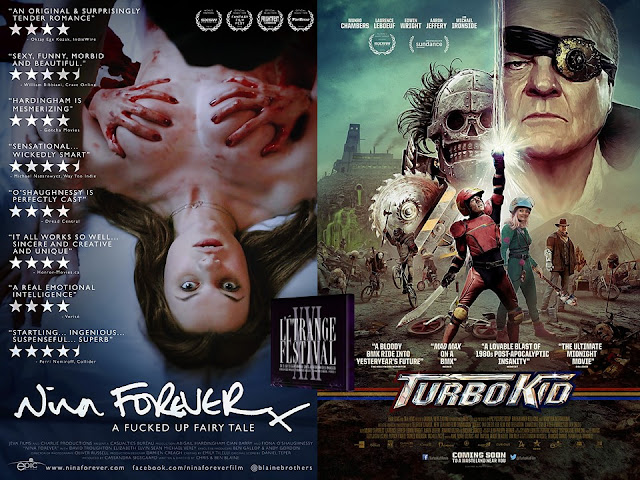 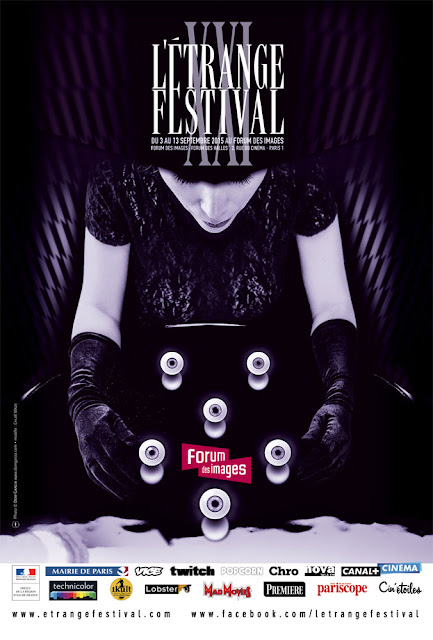 “A real journey is the one that teaches you something different from what you expected. You need to change direction, to create and to discover. The real discovery is unpredictable.”
These words borrowed from Michel Serres recently presented the twenty-first edition of the Festival de l’Etrange in Paris, which took place at the Forum des Images as it does every September. Hyped in the press as being superior to the precedent festival, the films selected show a rather invigorating appetite for genre. Just by reading the program (Brand New-U, Baahubali, Tag, Tangerine, Jodorwsky’s Dune, Stung, AAAAAAAAAH! The Invitation, Ruined Heart, Wyrmwood, Tales of Halloween, etc.), we can see the level of originality and excellence of the movies showcased during this surprising festival which once again confirms the upsurge of genre filmmaking. 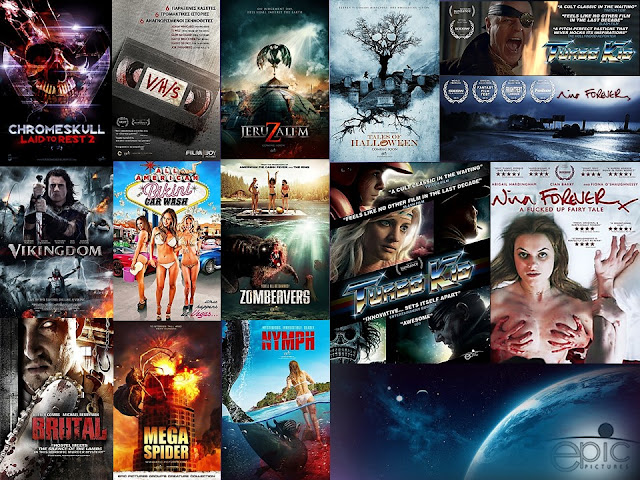 Two movies in competition are worthy of special mention: Nina Forever by UK-based brothers Ben & Chris Blaine and Turbo Kid by Canadian trio François Simard, Anouk Whissell and Yoann-Karl Whissell. It’s also interesting to note that these two movies are distributed by Epic Pictures, one of the finest distribution companies on the market, if not the finest. Their choice of material is extremely specialized and risky (far from the usual formatting) and, while keeping in mind the requisite for entertainment, the studio chooses to distribute and sell movies that are real movies by filmmakers. This key point is one of the reasons for the company’s wide success. Epic has grasped what tomorrow’s audience wants and what will soon be the movies of the future. Among its figureheads is Shaked Berenson, executive producer on Turbo Kid, and a dedicated movie aficionado. When one does things with passion, the public can always tell. 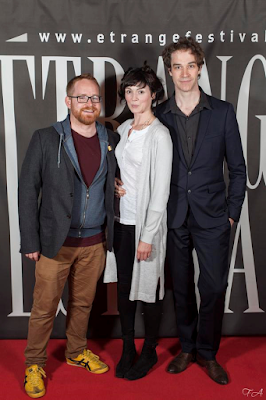 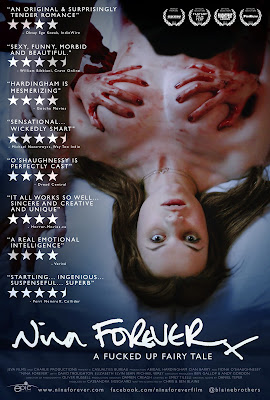 2015 (UK)
Written and directed by Ben & Chris Blaine
Romantic Comedy/Horror
Filmed in Alexa, Format 2.35 – Dolby Digital Sound
With: Fiona O’Shaughnessy, Abigail Hardingham, Cian Barry, David Troughton, Elizabeth Elvin, Bill Holland
Director of Photography: Oliver Russell
It’s always a positive to meet the directors and star of the movie that’s being screened, especially when they are warm and approachable, and the movie in question is presented by the international press as being something of a little gem. Despite the fact festival-goers were lucky enough to meet The Blaine Brothers and their leading lady, Fiona O’Shaughnessy, whose portrayal of bloody Nina is magnificent, they still weren’t prepared for what they were about to see.
The subject of Nina Forever, very original and quite shocking, is absolutely delightful. Holly appears to have found true love when she falls for her colleague Rob. He is nursing a broken heart after losing his significant other in a fatal road accident and she desperately wants to relieve his anguish. However, the couple’s happy union is soon compromised when the restless Nina returns from the afterlife and begins taunting them each time they attempt intimacy. If this sounds like a recipe for success then rest assured it is.
Because it’s treated both realistically and in an off–beat way (we are crazy about that irresistible British humor), the movie has a refreshing and wholesome fairy tale aspect to it. Strangely enough, the love scenes, which could have been the movie’s weak point, actually prove to be its strong suit. Note that in these scenes, both the actors’ performances and the directing are brilliant. It’s quite rare that sex on the screen turns you on. With the exception of Basic Instinct or Enter the Void, onscreen sex often excludes us and can bore us to tears. Here, it’s exactly the opposite. There’s an amazing energy that emanates from these scenes and we really feel involved! 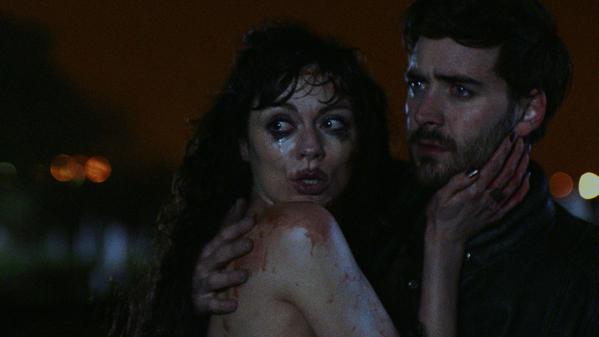 Nina Forever is supported by a fabulous trio of actors (Fiona O’Shaughnessy, Abigail Hardingham and Cian Barry) who make it a wonder of pure, real emotions. Holly’s character, played by Hardingham, transforms in a few minutes from a feeling of emotional deprivation to a spectacular state of true love. Thanks to her sincere and remarkably moving performance, which responds to a turn from Barry full of sensitivity, restraint and depth, we are swept away willingly into their story.
Making one believe in a feeling of real, deep love is not an easy feat, but The Blaine Brothers’ camera captures this emotion exquisitely and ramps it up tenfold. As their directing is perfectly controlled throughout, we see the real theme of the movie emerge rapidly. What we’re talking about here is a certain frustration, a certain feminine harshness faced with the lack of romanticism and the insistent physical desires of their masculine counterparts.
What makes the film fantastic is that by underscoring this frustration, the authors actually express a real masculine distress faced with the opposite sex’s lack of understanding. The intention might seem to be defeatist, but it isn’t. The extraordinary love Holly and Rob feel for one another is what remains when the movie is over. Nina Forever is a declaration of love made to women; the movie’s title speaks for itself. 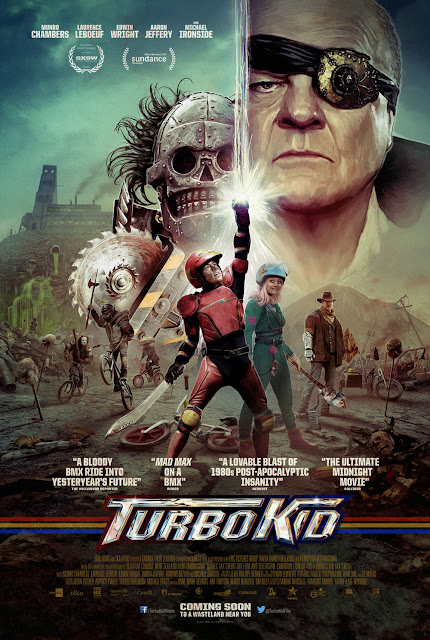 2015 (Canada/ New-Zealand)
Science Fiction – Action
Written and directed by François Simard, Anouk Whissell and Yoann-Karl Whissell
Filmed in Alexa, in Red and with a Sony A7S, Format 2.35
With: Munroe Chambers, Laurence Leboeuf, Michael Ironside, Edwin Wright, Aaron Jeffery, Romano Orzari, Orphée Ladouceur
Music: Le Matos, Jean-Philippe Bernier, Jean-Nicolas Leupi
Our second feature begins in a post-apocalyptic wasteland, where orphaned young daredevil Kid lives on his wits alone, riding his BMX across the barren land as he hunts for tradable items. After coming across the girl of his dreams, bubblegum princess Apple and promptly losing her to treacherous overlord Zeus, Kid is forced to access his turbocharged inner hero and take on the might of Zeus’ masked militia and save the day. Game on!
Like Nina Forever, Turbo Kid played to a packed house when it was screened in the huge, 500-seat movie theater at the Forum des Images. Highly applauded, the movie is a treasure of originality, poetry and freshness. It’s a movie that speaks directly to our inner child. The awestruck look that our hero maintains is the movie’s principal subject and also its raison d’être. The Kid is a hero capable of eradicating evil with an unwavering faith in what is beautiful and pure. His faith in humanity is unchanging even when this humanity, expressed in the guise of unconditional love, comes from his robotic girl friend, the loquacious Apple, admirably played by Laurence Leboeuf. 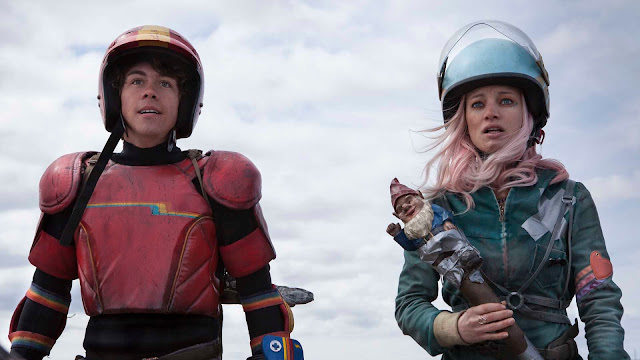 Seeing a magical movie like this emerge in a time as cynical as ours is nothing short of miraculous. The movie’s first twenty minutes are rather critical for any moviegoers unaccustomed to this kind of off-beat eighties show. But the subject’s sincerity and the characters’ power, not to mention the spectacular primary bloodbath in Zeus’s arena, dispels any remaining doubts regarding the kind of movie we’re watching.
Turbo Kid is an entertaining, layered movie which plays the splatter movie card to the max but never once abandons its good humor. While the splatter is a whole lot of fun, it’s the unbelievably powerful emotion which truly makes it resonate. All bases are covered and the ingredients one expects from a movie are present and correct: suspense, laughter, emotions, fear and action. Yet Turbo Kid doesn’t resemble anything we have ever seen. Moreover, one would almost be tempted to show it to kids since its poetic atmosphere is rubber stamped with grace. 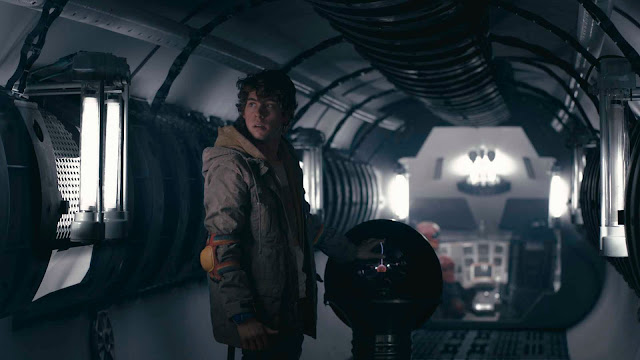 It’s satisfying to note that one can still achieve fresh results thanks to perfectly assimilated solid references. Of course, the trio of directors know its heritage and we appreciate any nods to Mad Max, The Terminator or Soylent Green. But when Apple and the Kid kiss under an umbrella just as a shower of blood suddenly rains down, we’re elated because, against all odds The Umbrellas of Cherbourg suddenly appears, a romantic musical comedy if there ever was one. And in that resides the esprit of this wonderful movie, just as enchanting as it is utterly surprising. In spite of its wonderfully stylized look, Turbo Kid had surprisingly a limited budget. But the essentials are precisely where they should be and we happily play ball.
While the movie’s sets are minimal, the dryness of wide open spaces serve its subject since water has become a rare commodity and an effective way for Zeus (a brilliant as ever Michael Ironside) to enslave his subjects. Another plus comes with the props, costumes and also hair and makeup. These are very important elements, especially with a film such as Turbo Kid, which optimize the experience markedly. A tip of the hat to a crew aware of how to effortlessly to keep us invested for nearly two hours and inspire our imaginations, making us fully believe in an improbable world. A challenge perfectly met then. 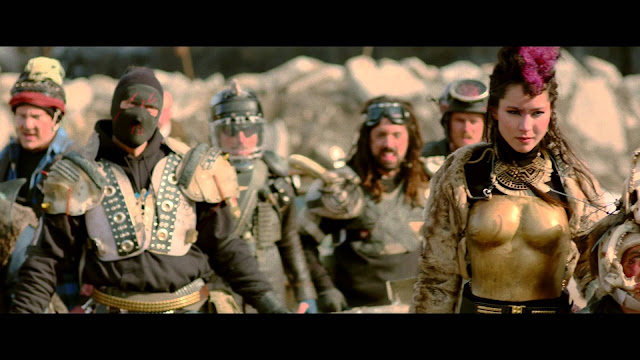 Another crucial factor which lends Turbo Kid its magic is its fantastic special effects. They are old school down-and-dirty practical effects and, far from weakening the movie, they ensure a touching sincerity plus a real life expectancy. Fans of genre movies, tired of the clinical nature in which these films present soulless CGI, will certainly value it.
The soul is unquestionably the film’s driving force. It is constantly evident and reveals itself through a killer score, which relays every emotion. Nearly the whole movie is punctuated by audio and, surprisingly enough, it works. The editing and sound mixing, implemented in masterly fashion, brilliantly maximize the impact of every scene in the movie. There are scenes, in particular, romantic exchanges with Apple, where the music amplifies the actors’ performances calling to mind the silent movies of years long passed. In this respect, Turbo Kid is something of a UFO. 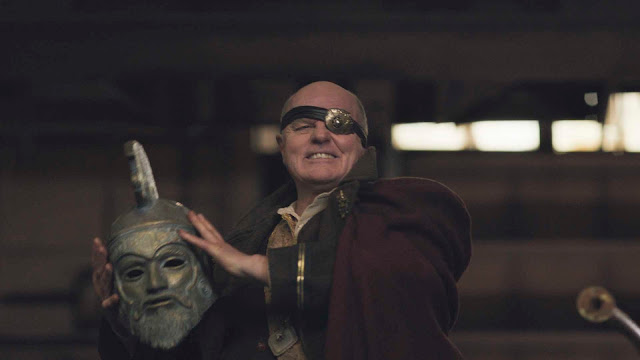 As mentioned, the performances are amazing without exception. Turbo Kid gratifies us with its spot-on three-star casting: Chambers is fantastic as the Kid and is ideally matched by Leboeuf, who is similarly exceptional as Apple. As for Jeffery, he’s irresistable as cowboy Frederic and perfectly counterbalances the Machiavellian style of Zeus as presented by Ironside, stunningly cynical and particularly memorable as half-man, half-robot tyrant.
The RKSS collective have fashioned a movie which, despite being massively engaging, does more than simply entertain. It talks frankly about the mess our societies are already in. By drowning ourselves in numbers, the world has let accountants dictate its actions… The leaders themselves have been deceived by the machines which took their place… Prophetic? With ingredients that mesh so well and the soul it bears proudly there’s every chance that Turbo Kid will become the cult classic it deserves to be.


Emilie Flory is becoming something of an underground icon. Her upcoming project “ Trauma Dolls”, about a woman named Bijou who suffers a horrible accident and becomes a fashion model with murderous intent, may propel her into the radar of horror fans in the US and abroad... Read more: http://www.splatsofblood.com/emilie-flory-genre-bending-trauma-dolls/ 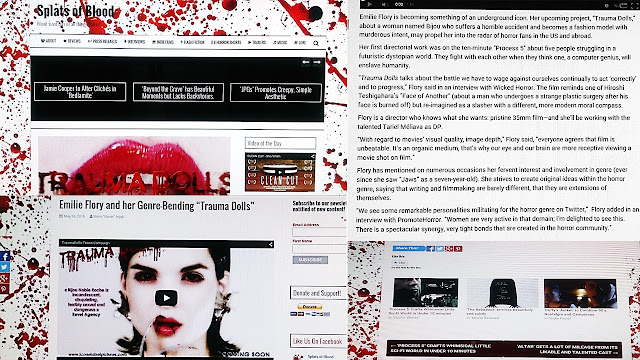 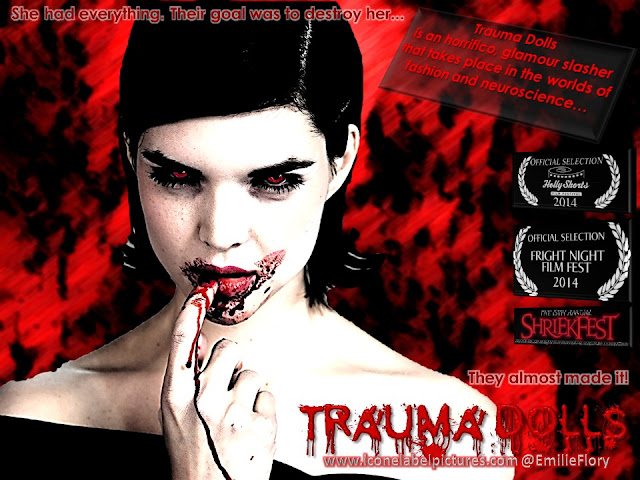