More timely than ever!… 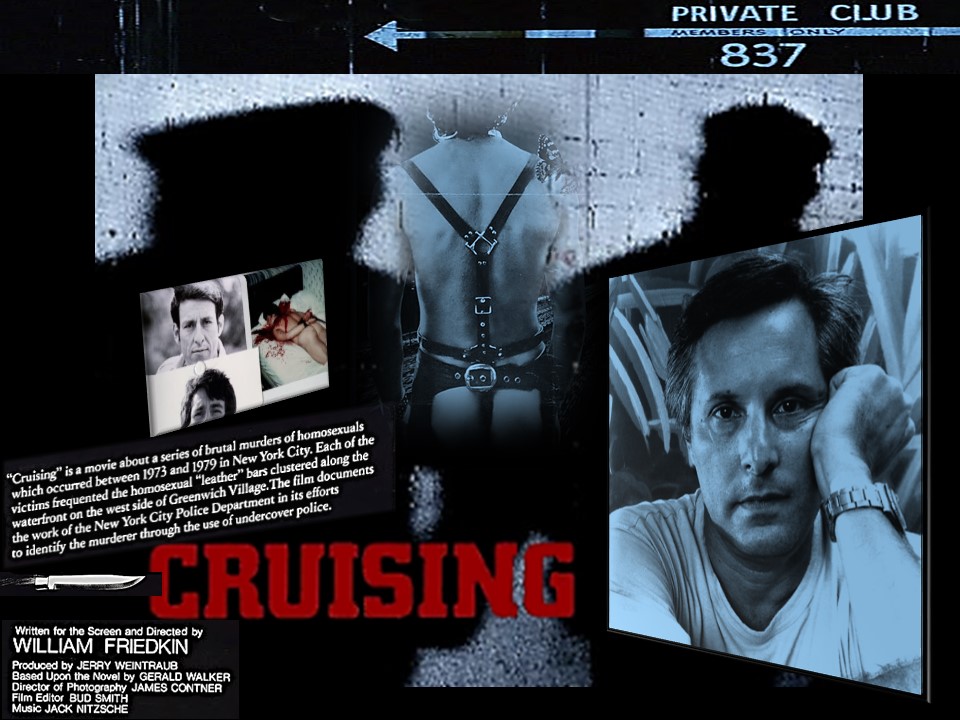 Shown with a 35mm optical print during the “contamination” cycle proposed by the Forum des Images in Paris, Cruising was presented as an immersion into a hostile environment. The movie followed a screening of Bug and preceded one of The Exorcist, two more first-rate movies directed by the tremendous William Friedkin. A conference was also dedicated to the filmmaker’s work: His remarks and vision, acclaimed and controversial, but remarkably timely, have become essential again in these days of filmmaking scarcity.
Cruising, an exceptional film if there ever was one, remains a major cinematographic case in the 7th art’s history. Major not only for what it reveals about its author, an incredible fighter and great perfectionist subjected to insurmountable difficulties for the duration of the project (he almost died of a heart attack shortly after), but also by the bridges it builds between different movie forms and genres in the 7th art’s global scene.
Cruising is the story of Steve Burns, a young and ambitious New York cop who accepts an undercover mission in gay S&M circles to clear up a series of brutal homosexual murders. Recruited to act as a lure, Burns has to change his identity and his appearance. In so doing, he gradually drifts away from those close to him and the life he’s made for himself. He takes on another personality, another “self” that surfaces in him and affects his psyche and his whole behavior.
The original idea for the movie, vaguely inspired by journalist Gerald Walker’s novel, came from some articles by columnist Arthur Bell about a series of unsolved murders in New York’s gay S&M bar neighborhoods. William Friedkin drew inspiration from these news items that gave him the motivation to start working on this story. He found the material in his close circle: Thanks to certain stories told by investigator Randy Jurgensen, his friend and consultant on French Connection, who had to go undercover in gay S&M bars to unmask a killer, as well as the arrest of Paul Bateson, one of the radiologist actors in The Exorcist accused of having sadistically murdered homosexuals. Thanks to certain connections linked to organized crime, the filmmaker was also allowed to investigate in S&M bars himself before shooting in them.
It’s clear that Walker’s book, added to the exposure of certain sexual crimes in the press plus the Big Apple’s high crime rate at the end of the 70s, made New York in the 80s the ideal setting for several movies about serial killers: William Lustig’s Maniac came out in 1980 too (Joe Spinnel, the lead actor, was cast in Cruising), but also Brian De Palma’s Dressed to Kill and two years later, New York Ripper by Lucio Fulci.
The subculture described in Cruising, a perfect backdrop for the director to develop his ideas, was never considered by him as being the movie’s main intention. The barrage of accusations leveled against William Friedkin for having stigmatized the gay community is totally unwarranted. If Cruising distinguishes itself from the movies mentioned above by its environment, it’s essentially the way this environment is depicted that radically differs it from them.
Due to its treatment, Cruising frees itself from all the current codes and conventions of the day. Thirty-five years later it appears extremely timely: The midnight blue monochrome photography, the dark and sensual score, skillfully present and spellbinding, the directing sometimes clinical, sometimes emotional and impulsive (especially during the murder scenes where a few subliminal penetration shots can be found; “That’s how our brain works”, analyzes the filmmaker.), but also the pacing imposed by the story, deliberately caught in a symbolic vice to expand the subject, all these key points predate the movie. Cruising is an erotic crime thriller, but also a slasher that doesn’t really borrow from codes, and what’s more, it’s a completely reformulated giallo genre.
Symbolism here is pushed to the extreme to serve the psychological aspect. A virtuoso, William Friedkin takes us very far. The key to the movie lies in its last scene. It shows a tugboat crossing the Hudson River; the river is immersed in the grayness that enshrouds the port, barely lit by the ball of orange sun hanging over it… Consciously or not, this last scene refers to Monet’s Impressions, Sunrise. What it says about the movie is that, like impressionist paintings or films from the “first avant-garde”, it attaches more importance to a fleeting impression, to the probability of environmental phenomena (in Cruising the environment directly affects the character’s psychology), rather than to the stable and conceptual aspect of things. 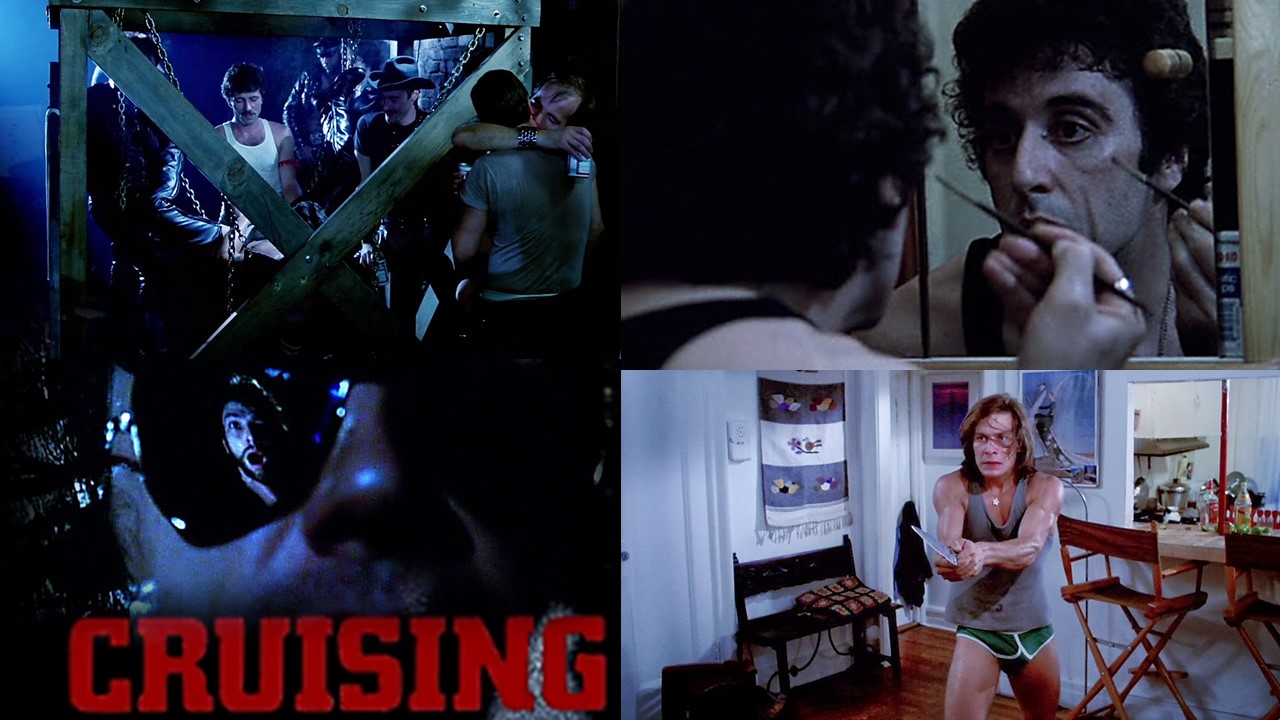 So even more than the character himself, it’s the particular world he’s immersed in that determines and triggers the story. The identity search is, almost as if it was meant to happen, the theme that truly dominates the movie. This quest results in a fantasy of ideal virility, which causes physical desire for this virility as well as hatred for this desire. The filmmaker uses certain visual and audio elements in a metaphorical way to highlight this masculine desire burdened by repressed urges (penetrating blades, leather, weight bars, police hats, gay porno magazines, river water, obsessive voices and nursery rhymes). He also brings in the memory of paternal castrating authority, something both Burns and the killer are trapped in: “You know what you have to do”, uttered by the killer’s father, sounds like a “Man up!” aimed at all the movie’s characters.
William Friedkin also takes us into late night leather bars where the hero is submerged by so many contradicting impressions that he ends up not knowing where to situate his desire. One of the movie’s great strengths is to give us hardcore scenes in a very realistic manner to make us feel Burn’s disorientation. Although most of these scenes were cut to avoid the movie being rated X (the extras are real patrons of the bar!), they fascinate and considerably speed up the feeling of alteration experienced by Burns. Without the cuts imposed by the MPAA, Cruising would send us into orbit because William Friedkin is careful to confuse things throughout the movie by showing us different men’s faces as being the killer’s face (the movie’s first killer plays the part of the second victim while the first victim plays the part of the killer in the porn movie theater, etc.)…
If William Friedkin wanted to show that the dark side of an individual remains a mystery for others, the problems owing to Al Pacino’s performance probably pushed him to dig a bit deeper. The choice of Al Pacino, described by some as a casting mistake, is quite unfortunate since the acting (using only the range of surprise) is dull and linear… William Friedkin himself says in his memoir (a memoir I will discuss at length in a later article) that when Al Pacino came on set he didn’t know what he was supposed to do and hadn’t learned his lines. The actor’s excuse was his wanting to recreate his character’s surprise on discovering the world of S&M. In actual fact, we feel a lack of implication in his acting, as though he were disembodied, except for two action scenes that create a discrepancy. One can only regret that Richard Gere, the magnificent Julian Kay in American Gigolo (released the same year), didn’t play the ambiguous part of Burns. He was the filmmaker’s initial choice and possessed all the finesse and ambivalence necessary for playing the role.
True to his lifelong vision between uncompromising Manichaeism and skepticism, but also probably because of the lack of ambiguity and evolution Pacino brought to his character, even though he gradually becomes aware of his true personality, the filmmaker took some basic measures while editing. Choosing to suggest that Burns might be either the killer or his copycat, William Friedkin once again gives us a razor-edged story with a strong theme about the ambivalence of the human soul: From a mixed-up young cop trying to find his way, Steve Burns becomes a young cop adrift and a potential murderer!
Just like Burns, who has become not only a mystery for others but for himself as well, the viewer then becomes free to wonder about his own dark side as well as that of others…
“There is a lot about me you don’t know”, Burns says to his girlfriend at the beginning of the movie… Even though Burns knows himself a bit better, he’s still not out of the woods; his dark side is a dishonorable mystery to him. A mystery he’s going to hide in order to move on, just as the movie’s penultimate scene suggests when Burns looks at himself in the mirror before turning around and staring at the camera while his girlfriend puts on his punk leather “uniform”…
Emilie Flory
English translation by Cameron Watson. 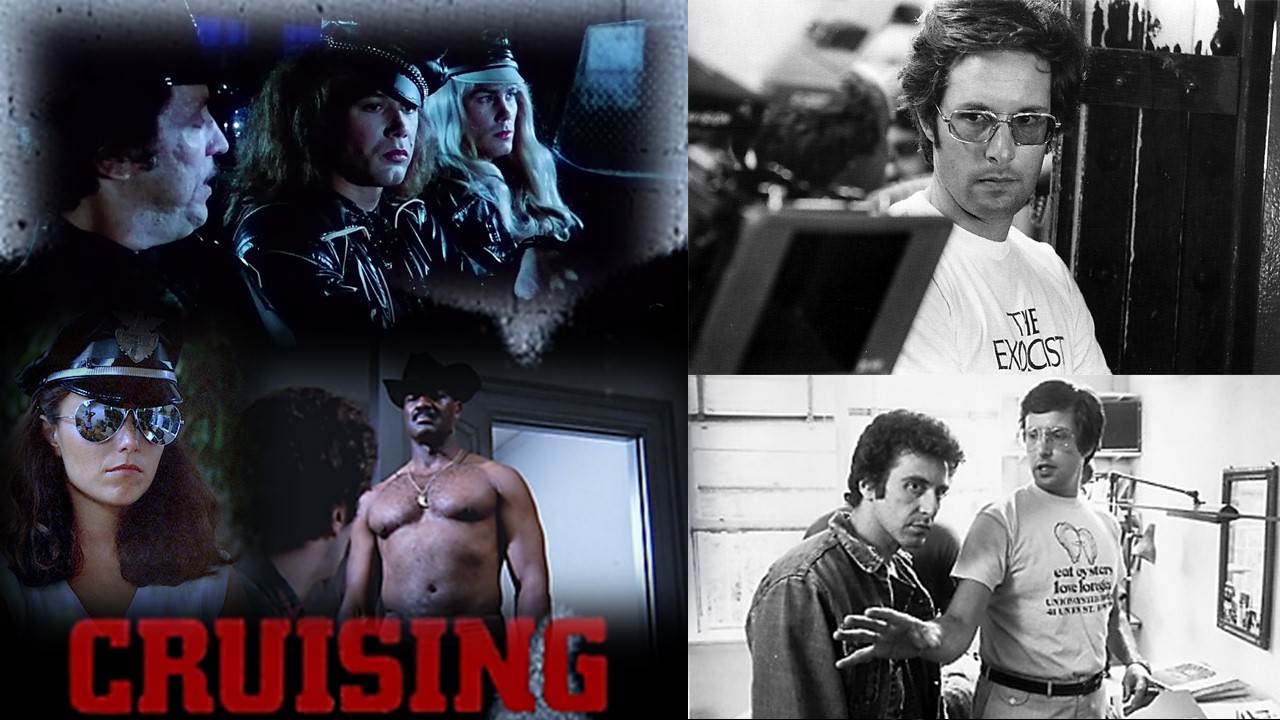